The Japanese word Monozukuri is a combination of ‘Mono’, meaning thing and ‘Zukuri’, meaning the act of making, sometimes translated as manufacturing or craftsmanship. Monozukuri describes the gap between the end result and the process that leads to that end result. Yet, there is so much meaning lost in just translating the word, because it literally does not cover the meaning of the philosophy at all. It is a mindset, a spirit, a philosophy. If Japanese want to talk only about manufacturing, they would use Seizo (manufacturing) or Seizan (production). Monozukuri is a typical Japanese concept and therefore is difficult to place in our Western culture. Before we can apply the concept, we first have to understand the essence of it.

The word itself is quite old. Historically, it was used in connection with an individual artisan and craftsman who took pride in his or her products. You probably know famous poets or painters like Shakespeare, Rembrandt or Michelangelo. But do you know famous weavers, carpenters or electricians? Probably not. In Japan however it is possible to become a recognized skilled artist in pottery, textiles, dying, lacquerware, metalworking, woodworking etcetera. Japan values such craftsmen on an similar level to traditional artists. Shoji Hamada for example, received in 1955 the honorable title of ‘Living National Treasure’, which is the highest award achievable in the Japanese arts and awarded to a very select few who have demonstrated mastery of their craft. 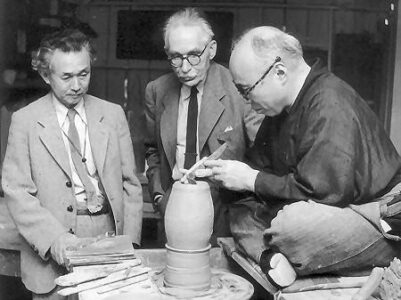 From the 1970s on, considering the concept of awarding and appreciation technical skills, Monozukuri was used in industrial production to boost its image. Working in manufacturing had the image to be dirty, demanding and even dangerous. The meaning of the Monozukuri concept was used to improve the image and self-value of industrial production. Suzuki, for example, used Monozukuri to make working in production more attractive. In 1999 the Japanese government even created a law for the promotion of Monozukuri, called the ‘Basic Technology Promotion’, with the purpose to improve the image of factory work by connecting the historically significant value of craftsmanship and artisans with modern manufacturing technology.

Nowadays, Monozukuri is associated to Japanese work ethic and the drive toward perfection. It is about the attitude to not only want to make perfect products, but to do this in a way that leaves room to constantly improve the process and its underlying processes. On the one hand it means that a service or product does not have to be perfect from the beginning and on the other hand you believe that even a good service or product can always be improved. This may sound like a contradiction. How can you deliver a perfect product or service that at the same time offers room for improvement? This apparent contradiction is less self-evident within the Japanese culture. It is accepted here that many things are not (yet) perfect and that it is therefore your duty to realize the highest attainable quality within these limitations. By simultaneously striving for perfection and paying attention to improve the operational processes even further, you will reach a higher level every day. From the Western way of thinking you could compare this with the pursuit of Utopia, an ideal world that cannot be reached. This is the essence of continuous improvement concepts like Kaizen, Lean, Kata etcetera.

Within the Monozukuri philosophy, it is not just about working optimally, striving for ‘Zero Waste’, but also about people feeling good about it and that the work gives satisfaction. For this it is important that people have the sense to be meaningful, that they belong to a group and that they get appreciated for their commitment and achievements. In Japan it is important that you take more pride in your work and that you get respected for this. In our Western society, where most people have everything they desire, it is important to realize that appreciation is not only about the monthly pay check, but it is about respect and appreciation.

So does this mean the Japanese work environment is superior to the Western work environment? Certainly not. Japan has some of the longest working hours in the world, and some young Japanese workers are literally working themselves to death (BBC, 2017). As we already explain many Japanese terms in this book, let me explain one more: ‘Karoshi’, which is the Japanese term to describe death attributed to overwork. Furthermore Japanese employees look to their superiors for approval before making big decisions. When you start telling your Japanese colleagues that they are wrong about something, you aren’t helping yourself and just making it more likely that you will lose respect.

Yet, it is very good possible to embrace the positive elements and the deeper meaning of Monozukuri into your organizational culture. A good example of how to apply the Monozukuri concept in a Western organization can be found at BMW. Here the management no longer speaks about the concept of Quality, but the word Pride is used instead. This may seem like a small difference, exchanging one word for another, but it goes much further in practice. By replacing this word cold computable and often accountable terms are replaced for warm, personal and attractive emotions. If every person in the company can honestly say that he is proud of what he has contributed to the product, the quality of the final product will certainly be guaranteed as well. A similar example can be found for some handmade cars, where employees put their personal signature on the engine block after assembling. Monozukuri is about common principles and by communicating them loudly and clearly, for example through visualization or banners. This can also be done by sharing emotions, working together in teams, by appreciate commitment and by celebrating achievements.